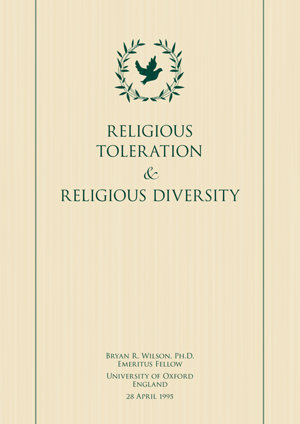 In this article from 1995, Professor Bryan Ronald Wilson surveys methodological issues that arise in defining a religion, especially when problematized by the fact that new religions, such as Scientology, emerged in the modern era to meet modern spiritual needs. This means that some new religions may express their theologies and practices in ways that differ from traditional or otherwise normalized forms of religious expression. However, this does not mean that they are in any way less genuine forms of religion. On the contrary, they deserve toleration, respect and protection, the same as any form of religious expression protected by national and international law. To Dr. Wilson, Scientology is an example of a “world-affirming” new religion, meaning that has a “generally positive orientation to the world” as well as a “mission to promote social reform, particularly in those departments of life, such as healthcare, education, and religious liberty.” “Scientology,” he explains, “differs radically from both Christian and Buddhism soteriological schemes, in that it claims to standardize and rationalize the techniques leading to salvation. It applies modern technical methods to spiritual goals in the attempt to introduce certainty and a pragmatically justified system into spiritual exercises. Emerging in a period in which the secular world has been increasingly dominated by science, Scientology is also committed to the idea that man needs to think rationally and to control his disturbing emotions as a means towards spiritual enlightenment and salvation. It represents one important current in the contemporary diversity of religious expression in our pluralistic religious culture.” Dr. Wilson concludes by asserting that “if basic human rights of freedom of belief and practice are to be maintained, it becomes essential that old stereotypes of just what constitutes religion should be relinquished.” The Church of Scientology agrees, and for this reason supports and promulgates the United Nations Universal Declaration of Human Rights to make human rights a fact. This includes Article 18 of the Declaration: “Everyone has the right to freedom of thought, conscience and religion; this right includes freedom to change his religion or belief, and freedom, either alone or in community with others and in public or private, to manifest his religion or belief in teaching, practice, worship and observance.”