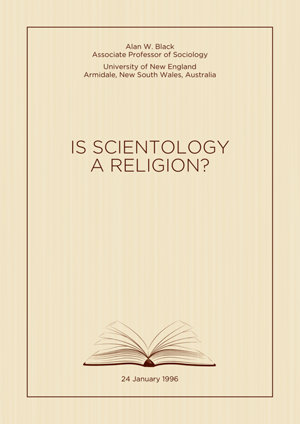 Is Scientology a religion? Yes, without a doubt, as Scientologists themselves attest on the basis of the benefits they receive from the Church’s theology, practices, and community life. But what counts as a religion in the first place? What are its characteristics and manifestations? In this article from 1996, Professor Alan W. Black provides sociological criteria by which religions are conventionally identified, for instance by practices and rituals, religious experiences, cosmic or mythic narratives, philosophy and doctrine, ethical systems, social and institutional structures, and the materiality and functionality of church buildings. Based on his own in-depth research of Scientology’s scriptures, theology and religious life, Dr. Black answers the question in the title of his piece with resounding affirmation. “For the reasons given in the preceding analysis,” he concludes, “I consider that Scientology is rightly regarded as a religion. As well as having the salient generic characteristics that typify recognized religions, Scientology has its own distinctive features—particular beliefs and practices that mark it out as a different religion rather than a non-religion.”

Alan W. Black, Ph.D., is professor emeritus of sociology at both the University of Western Sydney and Edith Cowan University. He also serves as adjunct fellow at the Centre for the Study of Contemporary Muslim Societies at the University of Western Sydney. His research interests include the sociology of religion and sustainability. Dr. Black is the author of dozens of articles and has written or edited a dozen books, including The Identification and Analysis of Indicators of Community Strength and Outcomes (coauthored, 2001); Why People Don’t Go to Church (coauthored, 2002); and Spirit Matters: How Making Sense of Life Affects Wellbeing (coauthored, 2010).