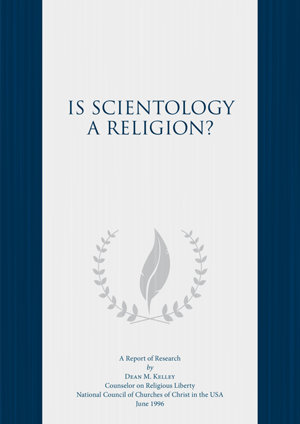 In this report from 1996, legal scholar and Methodist minister Dean M. Kelley addresses the question of “whether Scientology is a religion in a legal sense,” including according to criteria then acknowledged by the Internal Revenue Service in the United States. His findings were based on interviews conducted with twenty-one Scientologists at Churches in Sacramento, California; Albuquerque, New Mexico; Washington, DC; and Clearwater, Florida. “The purpose of the interviews was not to determine the teaching or tenets of Scientology,” he asserts, “but to determine what Scientology was doing for the adherent.” With this perspective in mind, he observed that Scientology occupied a centrally important role in the lives of his interviewees and provided a means to overcome personal problems, such as “drug addiction, alcoholism, frustration, aimlessness, depression, or a sense of futility,” and in the process realize their true nature as spiritual beings through the practicality of Dianetics and Scientology. On all counts—legal or theological—Mr. Kelley finds that Scientology abundantly qualifies as a religion. Several of his findings “help to reinforce the conclusion that Scientology is a religion,” as he writes, including the confessional nature of auditing, the Creed of Scientology that includes the precept that humanity is essentially good, marriage ceremonies, and global social betterment and humanitarian programs supported by the Church. These, in turn, support the “Aims of Scientology.” As L. Ron Hubbard wrote in 1965: “A civilization without insanity, without criminals and without war, where the able can prosper and honest beings can have rights, and where Man is free to rise to greater heights, are the aims of Scientology.”

Dean M. Kelley (1926–1997) was a legal scholar, an executive for religious liberty with the National Council of Churches (NCC) of the USA, and a board member of the American Civil Liberties Union (ACLU). He received his undergraduate degree from Denver University (1946) and his master’s in theology from the Iliff School of Theology (1949), and served as a minister for the United Methodist Church. His published works included Why Conservative Churches are Growing (1972); Why Churches Should Not Pay Taxes (1977); and Government Intervention in Religious Affairs (edited, 1982).