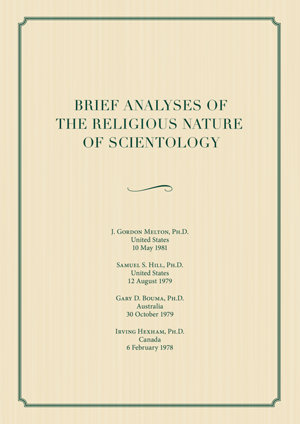 Gary D. Bouma, Ph.D., is professor emeritus and UNESCO Chair in Intercultural and Interreligious Relations at Monash University in Melbourne (Australia). He is an ordained Anglican priest and an acclaimed researcher in the fields of sociology and public policy. He has authored or coauthored over twenty-five books, including Australian Soul: Religion and Spirituality in the Twenty-First Century (2006); Democracy in Islam (2011); Being Faithful in Diversity: Religions and Social Policy in Multifaith Societies (2011); and Religious Diversity in Southeast Asia and the Pacific Islands: National Case Studies (2014). He has served as past president of the Australian Association for the Study of Religions as well as past chair of the board of directors of the Parliament of the World’s Religions (2009). In 2013 he was invested as a Member of the Order of Australia (AM).

Next
I. A Short Study of the Scientology Religion
by Gordon Melton, Ph.D.