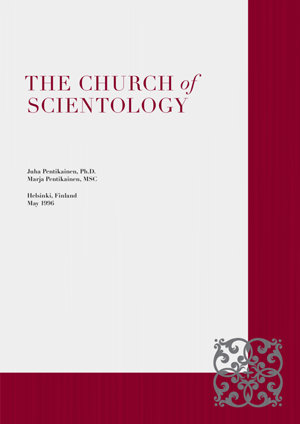 In this joint report, Drs. Juha and Marja Pentikäinen of Finland describe “five dimensions of religion”—cognitive, emotional, behavioral, social, and cultural—and examine and evaluate the senses in which these are reflected in their case study of the Church of Scientology. The result is a survey of the theology, practices and community life of Scientologists in abundant demonstration of these dimensions. “There are, according to our opinion, many reasons why Scientology may be considered a new religion,” they write. “What in particular fits into its categorization is the fact that it is a modern Western-born religion in the very Western meaning of the word ‘religion.’ It clearly is a manifestation of that type of new ‘religiosity’ which has emerged in the Western world using modern media of socio-cultural networks when transmitting its religious message to a wider public…. Thus, we have found Scientology to be a religion.”

Marja Pentikäinen, MSc, served as executive chief of the Foreigners’ Office of the City of Tampere. Her doctoral thesis at the University of Tampere was on the subject of the integration of African and Asian refugees in Finland. She has lectured at the Universities of Tampere and Helsinki and offered her expertise as a social worker to expert groups and committees on the subjects of foreigners, immigrants, refugees, their social problems, values and religions, particularly in the context of Finland.