From its beginnings the Church of Scientology has recognized that freedom of religion is a fundamental human right. In a world where conflicts are often traceable to intolerance of others’ religious beliefs and practices, the Church has, for more than fifty years, made the preservation of religious liberty an overriding concern.

A vital component to preserving this fundamental human right is an understanding of the right to freedom of religion or belief and its meaning under universal human rights principles and international human rights law.

In this regard, a new Church of Scientology booklet, What is Freedom of Religion?, is designed to inform the public regarding the detailed and complex nature of the right to freedom of religion for believers and religious organizations of every faith.

From persecution of religious minorities to issues revolving around religious worship, beliefs, rites, expression, association, dress, symbols, education, registration and workplace discrimination, religious freedom issues have achieved a prominent place in global headlines. Yet many do not understand what rights fall within the scope of freedom of religion or belief or what the term really means. 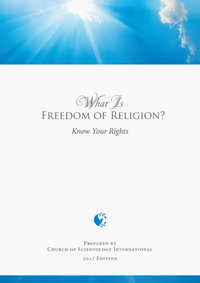 A publication from the Church of Scientology International

“We of the Church believe: That all men have inalienable rights to their own religious practices and their performance.”

The precise human rights standards regarding freedom of religion are detailed in international human rights treaties, including the Universal Declaration of Human Rights, the International Covenant on Civil and Political Rights, the European Convention for the Protection of Human Rights and Fundamental Freedoms, the UN Declaration on the Elimination of All Forms of Intolerance and of Discrimination Based on Religion or Belief, the Helsinki Final Act, the Vienna Document, OSCE Guidelines on the Legal Personality of Religious Communities and Legislation Pertaining to Religion, and European Union Guidelines on the Promotion and Protection of Freedom of Religion.

THE CHURCH OF SCIENTOLOGY
AND FREEDOM OF RELIGION

Freedom of religion is both explicitly articulated and implicitly affirmed throughout Scientology Scripture. Not only are all Church of Scientology ministers required as part of their ministerial training to become familiar with the great religions, but the Church’s Creed, written shortly after the first Church of Scientology was founded in California in February 1954, declares “That all men have inalienable rights to conceive, choose, assist or support their own organizations, churches and governments.” In that same year of 1954, the Founder of Scientology, L. Ron Hubbard, issued the Code of a Scientologist to provide members of the new church with guidelines in fighting for human rights and justice through social-reform actions. The Code pledges every Scientologist “To support the freedom of religion.”

There can be no true freedom without responsibility. Hence the Church holds that religious organizations have a right and a duty to engage in good works that benefit society. Indeed, Mr. Hubbard held that a decline in religious influence presages deterioration in the cultural level of a civilization: 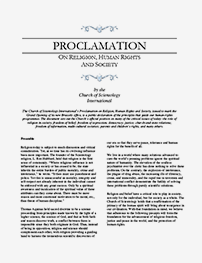 “When religion is not influential in a society or has ceased to be, the state inherits the entire burden of public morality, crime and intolerance,” he wrote. “It then must use punishment and police. Yet this is unsuccessful as morality, integrity and self-respect not already inherent in the individual cannot be enforced with any great success. Only by a spiritual awareness and inculcation of the spiritual value of these attributes can they come about. There must be more reason and more emotional motivation to be moral, etc., than threat of human discipline.”

Church of Scientology advocacy support of religious freedom embraces the recognition that freedom of religion must include the willingness to permit others to continue with their chosen religion or to change their religion. This can occur only in a society that recognizes the distinction between church and state and where no one religion is permitted to assume a dominant role in the affairs of government. In a Proclamation on Religion, Human Rights and Society, released in September 2003, the Church articulated its definitions of religious freedom and the responsibility this right places on governments in particular:

“Any restrictions on the freedom to manifest religion or belief may only be permitted if they are a) prescribed by law, b) necessary to protect public safety, order, health or morals, and c) employ the least restrictive means necessary to ensure they are applied in a manner that does not vitiate individual and collective rights to freedom of thought, conscience and religion. States must not abuse their law enforcement or regulatory powers to justify actions that directly or indirectly infringe on religious beliefs or practices. Attempts under the guise of law enforcement to prosecute individuals or groups for practicing their religion constitute heresy trials that violate fundamental freedoms.”

These affirmations arise out of the Church’s own experiences as well as its observations of the hardships faced by other religious organizations throughout history. Today the governments of many nations have officially recognized Scientology as a religion. Its religious nature has been confirmed in hundreds of judicial and administrative decisions in countries all over the world. It was not always so. In its early days the Church of Scientology earned the ferocious enmity of vested interests who perceived the emergence of a new religion offering solutions to life’s problems as somehow a threat to their own operations. Thus the Church had to fight to win its right to religious liberty. In so doing, the Church has upheld the rights of all religions and its victories have blazed a path that others have been able to follow.

Landmark Victories for Religious Freedom and the Church of Scientology

Belgian Court Dismisses All Charges in Baseless Case Against the Church of Scientology in Landmark Victory...

On 11 March 2016, in a landmark decision, the First Instance Court of Brussels found in favor of defendants and completely dismissed all charges against the Church of Scientology of Belgium…

On 11 December 2013, the Supreme Court of the United Kingdom issued a unanimous, landmark ruling declaring that the Chapel at the London Church of Scientology must be recognized as a place of religious worship under UK law.

The Australian High Court’s decision regarding the Scientology religion in Church of the New Faith v. Commissioner of Payroll Tax (1983) is recognized as a landmark legal decision, establishing the standard for the definition of religion and religious charities in both Australia and New Zealand, and, indeed, throughout the Commonwealth of Nations.

Freedom of religion, of course, is articulated within the national constitutions of every democratic nation as well as in many international human rights instruments. But more than written affirmation is needed. In his January 2004 report to the sixtieth session of the UN Commission on Human Rights, the UN Special Rapporteur on Freedom of Religion and Belief pointed out that “… in many cases, States have not met their human rights obligations as regards freedom of religion” and he emphasized that these obligations “are not limited to the negative obligation to refrain from violating the right to freedom of religion or belief; they also include the positive obligation to protect persons under their jurisdiction from violations of their rights, including those committed by non-State actors or entities.”

In this age of intercontinental travel and instantaneous international communications, multicultural and multireligious societies must be our destiny. Religious, racial and ethnic groups need to learn to respect one another and to live in peace and friendship. Where division occurs, it is the role of religious organizations to step in to help bridge the barriers and resolve the conflict. It is a responsibility that the Church of Scientology takes seriously and has endeavored to fulfill since its inception.

Further Resources on Freedom of Religion

Below is a summary of the international human rights standards regarding freedom of religion as articulated in publications from the Organization for Security and Co-operation in Europe (OSCE), the European Union Parliament and the United States Commission on International Religious Freedom.

Guidelines on the Legal Personality of Religious or Belief Communities

Guidelines for Review of Legislation Pertaining to Religion or Belief

Freedom of Religion or Belief: Laws Affecting the Structuring of Religious Communities