For religious groups in the United Kingdom, other than the Church of England, Jews and Quakers, a religious wedding ceremony may only occur in a building that is registered as a place of worship under the Places of Worship Registration Act 1855.

In reaching its judgment, the Court reviewed the definition of religion used in the Places of Worship Registration Act 1855.

At paragraph 57 of the Supreme Court’s judgment, religion is defined as follows:

“A spiritual or non-secular belief system, held by a group of adherents, which claims to explain mankind’s place in the universe and relationship with the infinite, and to teach its adherents how they are to live their lives in conformity with the spiritual understanding associated with the belief system.”

Based on this definition, the United Kingdom Supreme Court determined:

“On the approach I have taken to the meaning of religion, the evidence is amply sufficient to show that Scientology is within it.”

The Court interpreted (at paragraph 62) religious worship as including any “religious services,” and ruled (at paragraph 65) that the London Church of Scientology chapel “is a place of meeting for religious worship within section 2 of the Places of Worship Registration Act.” The Supreme Court accordingly ordered that the Scientology chapel be registered as a place of worship and as a place for the solemnization of marriages.

Scientology’s religious bona fides have been officially recognized by a number of governmental agencies and public authorities in the United Kingdom: 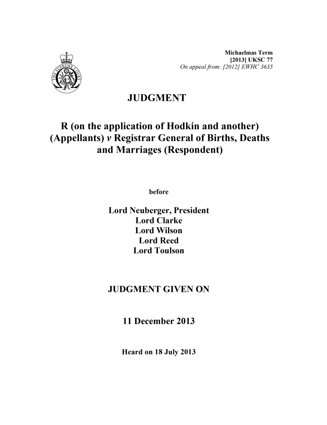 “I … declare that the chapel at 146 Queen Victoria Street is a place of meeting for religious worship.”

Churches of Scientology in United Kingdom