Religious groups in Germany may operate in various legal forms that are open to both religious and non-religious communities, ranging from nonprofit “idealistic” associations to public law corporations. Churches of Scientology in Germany are registered in the legal form of nonprofit idealistic associations, clearly stating their religious aims, and as such their formal legal status is no different from that of many other well-recognized religious communities, such as Buddhists, Muslims, Hindus, Quakers, Jehovah’s Witnesses and members of the Bahá’í faith.

Over the past three decades the German courts—in some fifty decisions—have decided that the Church and its members enjoy the protection of freedom of religion guaranteed by Article 4 of the Basic Law (Constitution) of Germany.*

German courts have repeatedly recognized that Article 4 of the German Constitution, concerning freedom of faith, conscience and creed, applies to Scientologists and the Church of Scientology. 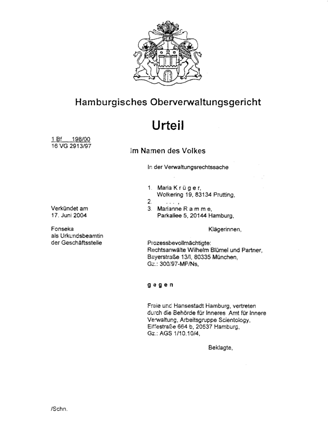 “The volume of ideas of the Scientology Organization deal with transcendental contents and the position and meaning of Man in the world. If these teachings of L. Ron Hubbard regarding the immortal soul as the carrier of a life energy (THETA) and regarding the THETAN, and regarding its relation to the material universe designated as MEST, and regarding the path of the soul through innumerable lifetimes, are believed, and if the path to higher levels of existence (CLEAR and [OPERATING] THETAN) that remind one of levels of salvation, are identified with, this then characterizes a philosophic belief or a religious denomination.”

Churches of Scientology in Germany