The seminal decision on the definition of religion in the Commonwealth of Nations, recognized as such in both Australia and New Zealand, is the Australian High Court’s decision regarding the Scientology religion in Church of the New Faith v. Commissioner of Payroll Tax (1983) 1 VR 97. The High Court determined that the Church of Scientology “has easily discharged the onus of showing that it is religious. The conclusion that it is a religious institution entitled to tax exemption is irresistible.” In reaching that conclusion, the High Court formulated the following definition: “Belief in a supernatural being, thing or principle; and acceptance and observance of canons of conduct in order to give effect to that belief.”*

Today that High Court decision is the standard that forms the basis for determining what a religion is for purposes of Australian charity law. The Australian government’s official inquiry into the Definition of Charities and Related Organizations published in 2001, eighteen years after the decision of Australia’s supreme judicial authority, cites this case as “the most significant Australian authority on the question of what constitutes a religion… The High Court found Scientology to be a religion. On the question of the current approach to the meaning of religion, the Scientology case provides the best elucidation….” 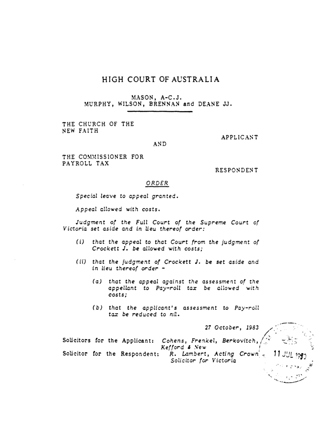 “[T]he conclusion that [the Church] is a religious institution entitled to tax exemption is irresistible.”

Churches of Scientology in Australia