Scotland does not have any religious registration-requirements for religious groups. It does, however, recognize religions through registration of ministers to engage in legally binding religious weddings. To have a religious wedding in Scotland, the minister must be registered as a religious-marriage celebrant. The registration of religious celebrants is governed by section 9 of the Marriage (Scotland) Act 1977. This provides that a religious body, not being the Church of Scotland or one of a number of listed religious denominations, may nominate to the Registrar General any of its members it desires should be registered as empowered to solemnize marriages. Section 9(2) provides that the Registrar General should reject a nomination if, in his opinion, the nominating body is not a religious body, or the marriage ceremony used by that body is not of an appropriate form, or the nominee is not a fit and proper person to solemnize a marriage, or there are already registered under this section sufficient members of the same religious body as the nominee to meet the needs of that body. 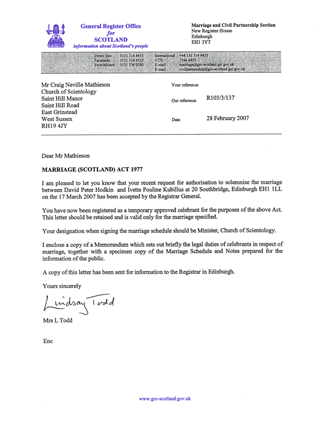 “Your recent request for authorization to solemnize the marriage of [parishioners] at 20 Southbridge, Edinburgh… has been accepted by the Registrar General.”