Government ministries in the Netherlands express their recognition of the Scientology religion by their treatment of the Church, its parishioners and ministers. For example, the Justice Department grants Scientology ministers the right to visit prisons to counsel and minister to prisoners; the Education Department grants Scientologists the right to form their own schools for educating their children in accordance with their religious beliefs; and the Tax Office accepts Scientology’s status as a religion.

In 2007, a Scientology parishioner successfully petitioned the Court for her child to engage in home study based on her and her daughter’s religious beliefs. The Court relied on the European Court of Human Rights decision in Church of Scientology v. Moscow (5 April 2007, Appl. 18147/02) in reaching this decision. In 1991, in accordance with the principles of religious equality and non-discrimination, a tax inspector was instructed by his seniors to treat the income tax statement of a Scientology minister the same as those of clergy of other religions. 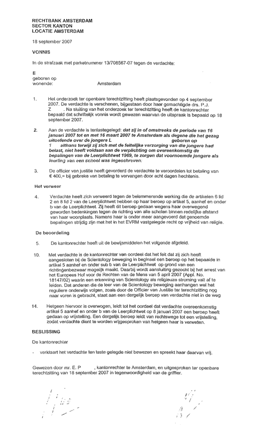 “The Court considered … the judgment of the European Court of Human Rights of 5 April 2007 (Appl. No. 18147/02) which recognizes Scientology as a religious movement.”
COURT OF AMSTERDAM