In line with France’s constitutional concept of secularism, the State recognizes no religious denomination. (See Dogru v. France (2009) 49 EHRR 8, §18). All religious communities in France carry out their activities in the form of associations under the Law of 1901 on Associations and/or under the Law of 1905 on Separation of Church and State* and the Church of Scientology is no exception. It has duly registered churches in both forms, clearly stating their religious and liturgical aims. As such, the Church’s formal legal status in France is no different from that of other, mainstream religious groups, such as Catholic, Protestant, Muslim and Jewish communities. (See, e.g., Cha’are Shalom Ve Tsedek v. France [GC], no. 27417/95, §§ 22, 45 and 46, ECHR 2000‑VII). 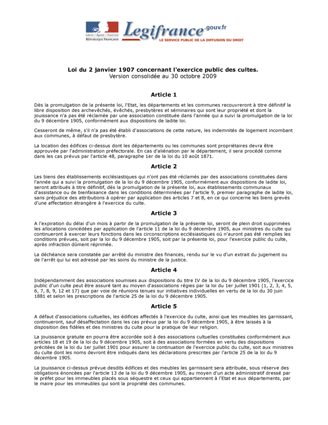 “…The public exercise of worship can be ensured both by associations governed by the law of 1 July 1901… and according to the requirements of Article 25 of the law of 9 December 1905.”