The decision came less than two years after the grand opening July 5, 2015 of the Church of Scientology Bogotá. The event was celebrated by some 2,500 guests and officials from the Colombian Ministry of Defense, Colombian Anti-Narcotics Department, Colombian National Police and Ministry of Social Integration, Bogotá City.

For more than eight years prior to the opening, Colombian Scientologists spread the message of peace through implementation of the United for Human Rights campaign and The Way to Happiness program. Both programs became part of the curriculum in training military forces in the country.

On July 4, 2016, Colombian president Juan Manuel Santos signed the decree establishing the National Day of Religious Freedom and Worship. Religious leaders announced they would continue to work together to strengthen and support the peace process in Colombia.

The Church of Scientology Bogotá became a coordinating hub for other churches joining forces to promote religious freedom, while taking an active role in the peace process of Colombia.

The Church filed for religious recognition on April 5, 2017. One month later the recognition was granted. The resolution states that the decision “is based on a rigorous analysis of the administrative file in the terms of a constitutional principle of good faith, enshrined in article 83 of the Political Constitution.” 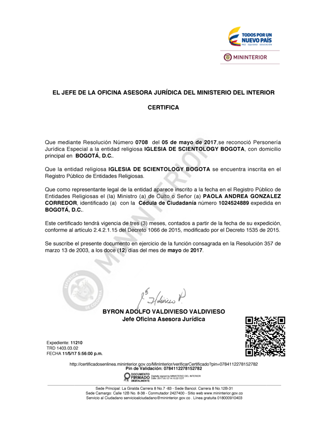 “The Ministry of Interior officially certifies the Church of Scientology Bogotá as a religious entity.”

Church of Scientology in Colombia