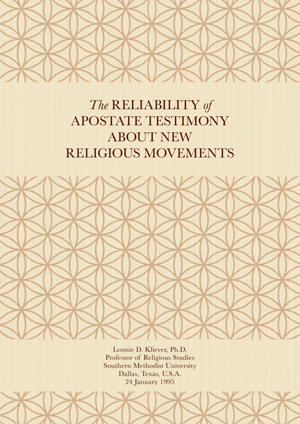 In this article from 1995, Professor Lonnie D. Kliever briefly surveys the history of apostasy in various religious traditions and then examines the unreliability of apostates (ex-members) of new religious movements. “I am convinced by reason of my own professional training and scholarly research,” Dr. Kliever asserts, “that the apostate should not be accepted uncritically by the mass media, the scholarly community, the legal system, or governmental agencies as a reliable source of information about new religious movements. The apostate must always be regarded as an individual who is predisposed to render a biased account of the religious beliefs and practices of his or her former religious associations and activities.” In addition, he notes that most apostates do not have public grievances against their former religion and in fact think back on their experiences with degrees of positivity. “Their departure,” he concludes, “usually goes unnoticed because most of the individuals involved regard their past experience positively as one more step in their own spiritual journey.” “By contrast,” he writes, “there is a much smaller number of apostates who are deeply invested in discrediting if not destroying the religious communities that once claimed their loyalties…There is no denying that these dedicated and diehard opponents of the new religions present a distorted view of the new religions to the public, the academy, and the courts by virtue of their ready availability and eagerness to testify against their former religious associations and activities. Such apostates always act out of a scenario that vindicates themselves by shifting responsibility for their actions to the religious group. Indeed, the various brainwashing scenarios so often invoked against the new religious movements have been overwhelmingly repudiated by social scientists and religion scholars as nothing more than calculated efforts to discredit the beliefs and practices of unconventional religions in the eyes of governmental agencies and public opinion…In short, on the face of things, apostates from new religions do not meet the standards of personal objectivity, professional competence, and informed understanding required of expert witnesses.”