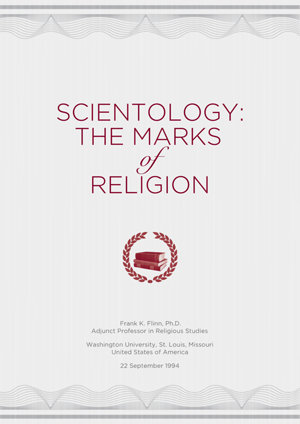 What is a religion? How—objectively and subjectively—do we know one when we see it? In this article from 1999, Professor Frank K. Flinn lists three marks, or characteristics, of religion: beliefs or doctrines about the nature of life; religious practices, including rituals and norms for behavior; and communal life that emerges out of these beliefs, doctrines and practices. “On the basis of these three markers and of my research into the Church of Scientology,” Dr. Flinn states, “I can state without hesitation that the Church of Scientology constitutes a bona fide religion. It possesses all the essential marks of religions known around the world: (1) a well-defined belief system, (2) which issues into religious practices (positive and negative norms for behavior, religious rites and ceremonies, acts and observances) and (3) which sustain a body of believers in an identifiable religious community, distinguishable from other religious communities.” In support of his conclusion, Dr. Flinn examines numerous features of religiosity, including the Creed of the Church of Scientology, the scriptural canon of the Church, the theology of the Church, and the place and purpose of delivering spiritual counseling known as auditing—and training others to do the same. Today Dianetics and Scientology services are delivered in over eleven thousand Churches, missions, and affiliated groups in countries all over the world.